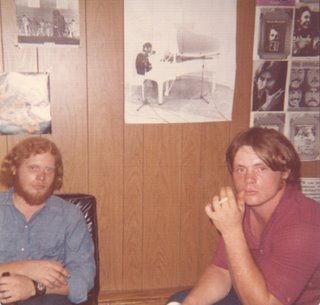 This shot was taken at a WTIT party during the summer of 1973. In the fall, they left to tour the country together. Billy returned and Johnnie stayed in Colorado for quite a while.
Posted by Bud Weiser, WTIT at 6:11 PM No comments: 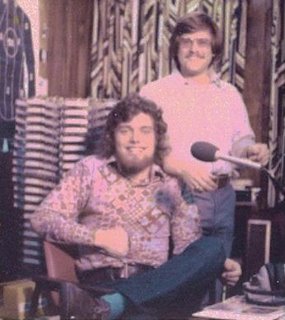 Bud was a DJ at WILI and Ed at WDRC (as Ed Mitchell) when this photo was taken. Ed became the "voice" of WTIT (program aids & show openers) in 1973. Rod Allen had moved to Alaska, although most of his announcing work stayed with WTIT through the eighties. Bud also asked Ed to cut openers & aids for WILI. Bud had no idea if the station would use Ed's recorded promos, but thhe management loved them. At that particular time WILI & WTIT sounded a lot alike.
Posted by Bud Weiser, WTIT at 1:53 PM No comments:
Newer Posts Older Posts Home
Subscribe to: Posts (Atom)